Recently, I received this mail, like many others... This is what it contained:

The Red Planet is about to be spectacular! This month and next, Earth is catching up with Mars in an encounter that will culminate in the closest approach between the two planets in recorded history. The next time Mars may come this close is in 2287. Due to the way Jupiter's gravity tugs on Mars and perturbs its orbit, astronomers can only be certain that Mars has not come this close to Earth in the Last 5,000 years, but it may be as long as 60,000 years before it happens again. The encounter will culminate on August 27th when Mars comes to within 34,649,589 miles of Earth and will be (next to the moon) the brightest object in the night sky. It will attain a magnitude of -2.9 and will appear 25.11 arc seconds wide. At a modest 75-power magnification Mars will look as large as the full moon to the naked eye. Mars will be easy to spot. At the beginning of August it will rise in the east at 10 p.m. and reach its azimuth at about 3 a.m. By the end of August when the two planets are closest, Mars will rise at nightfall and reach its highest point in the sky at 12:30 a.m. That's pretty convenient to see something that no human being has seen in recorded history. So, mark your calendar at the beginning of August to see Mars grow progressively brighter and brighter throughout the month. Share this with your children and grandchildren. NO ONE ALIVE TODAY WILL EVER SEE THIS AGAIN.

Got a bit curious about what I just read... I mean, how can anyone be able to see Mars as big as the moon??? It will be catastrophic, if the event ever took place. So, searched about it in the internet, and came to know some interesting facts..... This so called spectacular event has been nicknamed as the "August Mars Hoax".

The main thing to be noticed from the mail that the sender forgot to mention the year in which the event is going to occur!!! So, thats what started all the confusions and the rumours. Here are a few snippets I got from various sites.... Some of them are from various NASA articles (check out science.nasa.gov), so these articles are fairly authentic..... So read on, and know the facts.

Mars did make an extraordinarily close approach to Earth several years ago, culminating on 27 August 2003, when the red planet came within 35 million miles (or 56 million kilometers) of Earth, its nearest approach to us in almost 60,000 years. At that time, Mars appeared approximately 6 times larger and 85 times brighter in the sky than it ordinarily does.

Although Mars' proximity to Earth in August 2003 (referred to as a perihelic opposition) was a rare occurrence, the red planet comes almost as near to us every 15 to 17 years. To the unaided observer, Mars' appearance in August 2003 wasn't significantly larger or brighter than it is during those much more common intervals of closeness.

Mars had another close encounter with Earth in in 2005, but that occurrence took place in October (not August), and the red planet appeared about 20% smaller than it did during similar circumstances in 2003.

Earth and Mars are converging for a close encounter this year on October 30th at 0319 Universal Time. Distance: 69 million kilometers. To the unaided eye, Mars will look like a bright red star, a pinprick of light, certainly not as wide as the full Moon.

Disappointed? Don't be. If Mars did come close enough to rival the Moon, its gravity would alter Earth's orbit and raise terrible tides. 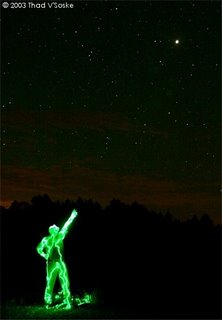 Painted green by a flashlight, astronomer Dennis Mammana of California points out Mars to onlookers on Aug. 26, 2003, the last time Mars was so close to Earth. Photo credit: Thad V'Soske.