Washing tomatoes, originally uploaded by abhishekontheweb.
Another photo blog - shows how bored I get sometimes in the evening, after a busy day at work. Thats what I have been upto in the kitchen tonight - clicking photos instead of cooking. At least the tomatoes are thoroughly washed now!! :)

So Why Another Blog?

You must be wondering - What? Another blog? Why? Isn't one blog enough for him?!?

Let me clear this up first. Yes, you have heard right. I am talking about another blog, which I recently started. And there is a reason behind starting this "other" blog. It's more of a technical blog, a kind of a journal about various things I am working on, various obstacles I have been perplexed by, and various things I wish to work on etc etc. You get the drift, right? In other words, I would be rambling about Java and related technologies on THAT blog - which would have seemed a bit out of place on THIS blog. And its called (drum rolls please..... wait for it....) "Technically Yours" (please don't make fun of the title :) ).

So, hit the link (and it's as easy to remember as this blog - just replace the "www" part with "tech" - in case you haven't noticed that yet) and start commenting on that blog's posts (at least on the introduction post, or the "About Me" page there).
P.S. One of my friends managed to discover the blog even before I publicized it anywhere (and took me by surprise). How cool is that!!! :) I like unexpected visitors sometimes.
Posted by Unknown at Saturday, March 13, 2010 3 comments:

Email ThisBlogThis!Share to TwitterShare to FacebookShare to Pinterest
Labels: blog 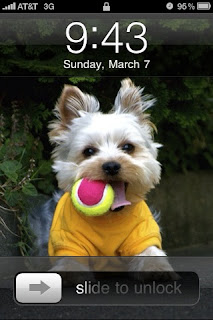 I agree that Apple has its reasons to be annoyed. Many of the features in other smart phones (like the Google Android platform based devices) have been directly influenced by what Apple first introduced in its iPhone. Instead of creating a complete new UI design, they are imitating the ideas already present and successful, in their phones. But, can you file patents for every feature, fathomed by your common sense, that you have introduced in your product, and expect to kill the competition later by filing a dozen patent lawsuits, when they come up with similar ideas? Do ALL of the 20 patents mentioned require legitimate legal actions? Or is it just a waste of enormous time and money for the concerned parties and the court? Apple has been respected and loved for its innovations (remember the "Think Different" ads, Macs, iPod, iPhone etc etc?). But with Apple diligently taking steps like these to get rid of the competition, people will be forced to think differently - no one likes to see someone becoming over-competitive.
Disclaimer: I am not a master of U.S. patent laws, but as a consumer of tech gadgets, I have presented my views on the situation. (I still love Apple and Google :))
Posted by Unknown at Sunday, March 07, 2010 4 comments: