writing, I think about one of the enjoyable events this year, our trip to the Sinhgad fort... It was one fine, sunny morning in January, and we were having our practical session. It was so damn boring, that after somehow spending the 2 hours in the lab, we, I mean a group of 6 friends, decided it was just impossible to attend the lectures after this. Well, we were in our final semster, so we didnt worry about attendence anyways. Watever, it was decided to go for a outing, and one of us suggested Sinhgad fort. After some quick plannings, it was decided not to waste anymore time and start....

Well, I forgot to mention the gang - Jasnoor, Aastha, Nikita, Kusum, Anjali, and me. And what was our mode of transportation?? Well, I had an Activa, and Jasnoor brought along his "teenage" Kinetic Honda, and ofcourse, Anjali had her trusty Scooty.

Now, the question was, did any of us know the route to the fort, or any idea how far was it?? Well, someone had a vague idea, and we started on our way. It took as about an hour to reach the outskirts of the city. We asked for directions, and finally continued on the correct route, our slow and gradual ascent uphill. Anjali's scooty was leading the way, she with her usual moto "Speed thrills, but never kills", was imagining herself to be John Abraham in Dhoom, never even looking back to see if we were following her. Poor Niki, who was the pillion, must have had hell of a time!!! They reached the fort, which was about 10km along the uphill road, in an hr or so. As far as I was concerned, I continued to move at my steady speed, keeping a track of Jasnoor and

Aastha, as their kinetic started giving problems. We were some place ahead, when I got a call from Jasnoor.His scooter needed some rest, as its engine had overheated. So, Kusum and I waited for them for about 15 min. By that time, our racing duo, - Anjali and Niki, had already reached, and were getting impatient!!! Finally, we finally saw Jasnoor's scooter. We rode alongside them for some time, but again their scooter gave up. So they decided to park their scooter there itself and continue the remaing 1 km walking. We continued on my scooter, and reached the fort in 5 min or so. So that was how we finally reached. We left the college around 12, and by the time we reached our destination, it was already 3 (we also halted for some time in MG, as some of us had some work there).
Rest was pretty enjoyable, sight seeing and all. The fort was all in ruins, but the

height at which it was built was quite remarkable. After spending a couple of hours (and not to mention all the photograph sessions), we started our descent... On our way back, we halted near the Kharakvasla lake for an hour to view the sunset. After that, we all decided to meet at CCD, east street, while on our way back to the college. 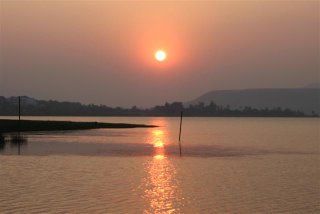 "Memory is a child walking along a seashore. You never can tell what small pebble it will pick up and store away among its treasured things."
~ Atlanta Journal ~ Pierce Harris
Posted by Unknown at Wednesday, August 02, 2006