2009 is here, and January is almost over. And, it had been an eventful month so far - Mr Obama becoming the president of United States (and that makes him, unarguably, the most powerful man on earth). Also in the news had been the popularity of our very own Mumbaikars in the British movie "Slumdog Millionaire", and our beloved Mr Rahman for weaving his melodious magic, yet again. I haven't had a chance to watch the movie though, but that's the first thing on my list for this weekend.
Other events which had created headlines, especially in India, is our PM's surgery, which kept him away from the 60th Republic Day festivities. The argument with Pakistan regarding the Mumbai attack continues, with its incessant denials of having any part to play in that event - phew!!!
The economy is still in bad state, with the unemployment rate increasing (and with the recent announcements of over 70k layoffs across various companies, things seriously look a bit too gloomy). UK has finally announced that it is in recession.
The announcement of the Padma awards have, as usual, created a bit of a news (atleast in my opinion). Conferring the award to our golden boy (in Olympics that is) was expected. And so was the list of filmstars (Akshay Kumar, Ash - which makes her the 4th Bachchan to get it). But did someone forget about the other medal winners at the Olympics.
So, it has indeed been a month of events. Hopefully, things will improve soon (from the financial point atleast).
And yes, this is my 2nd post for this year, and coincidently, it marks my 50th post on my blog (hurrays)!!!
Posted by Unknown at Wednesday, January 28, 2009 No comments:

Yup, you have guessed right - I am lately bitten by the Twitter bug... If you don't know what I am talking about, feel free to go to my Twitter profile. Its fun, and unlike other social networking sites (aka Facebook/Orkut etc etc), this just needs one single piece of info - what you are currently doing... Also known as "micro-blogging" - it allows you to post anything within the 140 word limit - so that others can follow your tweets. 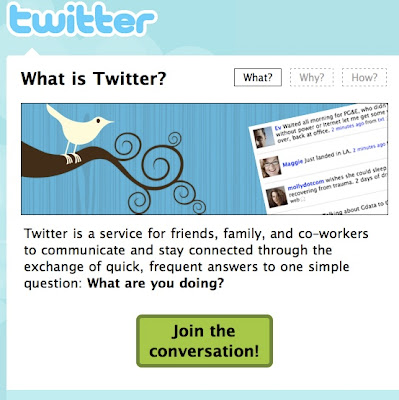 So what are waiting for?
Posted by Unknown at Wednesday, January 07, 2009 No comments: