Yesterday (the day after Thanksgiving - the so called "Black Friday" discount day in the retail world), I had a chance to take my camera out. With the winters just around the corner, it was a bit cold and windy (but pleasant and sunny none the less), and I was trying my hand to shoot some pics with the new camera - my intention was to get a handle over its features as quickly as possible. I managed to take some shots - and a few of them were taken in black and white to give that "cold winter effect". Here's a link to the slideshow for the rest of the pics: Flickr Slide Show

Posted by Unknown at Saturday, November 28, 2009 No comments:

My First Date with the Nikon D90 View from my apartment - Shutter priority with exposure at 30s
I had a blog post of an almost similar name a couple of years back - when I had got Canon A570IS. And after months of research and reading online articles, watching videos, I finally ended up ordering Nikon D90 with 18-105mm VR kit lens. It arrived this Tuesday, and I was SUPER excited - so excited that I left office a couple of hours earlier than usual :)
I would have loved to have shot an unboxing video (but, I was TOO impatient- just grabbed a knife and opened the box the instant I got home). I had also ordered some additional accessories (that included a Dolica Proline tripod). So, the first thing I do is to setup the camera on the tripod and shoot with a reasonably long exposure (30s). Thankfully, it was dark outside. And I liked the result :)
For the past 2 days, I have been reading about the features of the camera - in fact, had bought a book by David Busch specifically for that.
I guess I'll be using my Flickr account big time now.
Posted by Unknown at Thursday, November 26, 2009 4 comments:

Today's hot topic - my cooking. As Agila pointed out, I should blog about it. Good idea!!!
I was never into cooking. Even as a kid, I seldom watched how my mom made those delicious dishes. Until recently, I didn't even know how to boil an egg. The only thing I was able to make was tea. My parents' friends used to praise my "tea preparing skills" like anything (my mom taught me that way back when I was in 9th grade). Otherwise, I was utterly useless in the kitchen. And to be very frank, I never had to worry about it at all. Once I left home for college, thanks to the hostel food and cafeteria, my hunger problems were taken care of - well not exactly the way I would have preferred (implying the food was just horrible). But I survived those 4 years. Then when I started working, office cafeteria didn't make me feel the need to bring cooked food from home.
Living in Pune also had its advantages from the food front. Why would I want to learn to cook when there were numerous eating joints throughout the city. With all types of cuisines imaginable, I enjoyed my stay in Pune.
Now, when I am in US, the regular home made Indian food seem to be a delicacy. Before leaving India, my mom tried to give me a crash course in cooking, but failed miserably (she teaches well, but me being me, had other things in mind at that time).
And yesterday, with a bit of imagination, I tried to make something from what was available in the refrigerator - potatoes and peas (with tomatoes and onions), and some assorted spices. And to me surprise, it actually turned out to be delicious (well, there was no one else to vouch for that). But all in all, I was happy. Now I can experiment with other things. And I realized, that cooking can be fun :)
May be a blog on "Abhishek's own recipes" some day, eh? :D
Posted by Unknown at Saturday, November 14, 2009 4 comments:

The hibernation ends (yet again)... Yes, just 1 post in the past 6 months!!! Well, I didn't have much to write about recently, other than the fact that I have been on the move since May. But, now that I am settled at one place for quite some time, I thought of picking up this whatever little habit of blogging I had earlier.
Sitting at home after an usual day at work wasn't that common when I was in India - I generally came back home late. Here, its different. Its almost winters now - yes, I mean "almost", as most of my informants have warned me about how harsh winters are usually here. With DST off, things get dark a bit too early. 5 0clock, and its dark outside. And not to mention the constant roar of the wind which I am able to hear outside my apartment window.
I remember, when I landed in Chicago on 15th August, I loved the weather here. It was warm and sunny, and I could see the daylight till late 8.30s. And I made full use of that opportunity to visit some of the most famous places in Chicago - the Field Museum, the Shedd Aquarium, the Adler Planterium, the Science and Industry Museum to name a few. Millennium Park and Lake Michigan are just a mile walk from where I stay, so I used to visit those places frequently. And there was the Chicago Jazz Festival which 1 of my friends dragged me to.
One thing I like about this place is how much information is accessible anytime you want. My earliest friend in Chicago was in fact - google maps. From locating the nearest Walmart store, to exploring the various bus and train routes of CTA, it was really the most useful tool I found during my initial days here.
Now, that the winter sets in, it is getting difficult to get out of the house. But I am enjoying the cold chill - reminds me of the times I spent in north India.
Well, thats a lot of updates I seem to have given. But that pretty much sums up what I have been doing these days.
I leave you with a glimpse of some of the places I have been talking about... 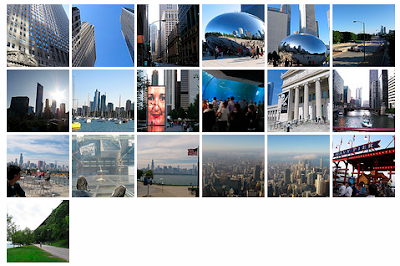 Check out my flickr stream here...
Posted by Unknown at Thursday, November 05, 2009 3 comments: